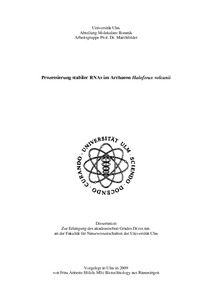 The RNA metabolism in kingdoms bacteria and eukarya is well studied, whereas the mechanisms in archaea are still not well understood. The goal of this study was to find new endonucleolytic RNases for RNA precursor processing and maturation in archaea. The following two approaches were applied: An in vitro approach for the identification of new RNases with known stable RNA precursors and a whole protein extract was applied, where the rRNA operon and two additional stable RNAs were used, and a second approach was taken by identification of in vivo and in vitro functions of the CPSF73 enzyme homolog. In the first approach it was possible to identify a new function for the tRNase Z from Haloferax in 5S rRNA precursor processing. tRNase Z cleaved in the same conditions as for tRNA precursor processing the 5‘ leader of 3‘-matured or not matured 5S rRNA substrates. It was shown that also related tRNase Z enzymes from the archaeon Pyrococcus furiosus, from Saccharomyces cerevisiae and from Arabidopsis thaliana processed the same substrate. Therefore a universal function in pre-5S rRNA processing of this enzyme is probable. The recognition of the substrate was found to be by interaction of a minimal tRNA structure in the leader with tRNase Z. This structure was analyzed in vitro in this study and was found to form only a stable motive in presence of at least a minimal amount of 5S rRNA nucleotides. Further minimal-tRNA elements were additionally searched by Brian Tjaden in the whole Haloferax genome and eight of 40 were analyzed here, but no specific processing with tRNase Z or other RNA-binding proteins was found. The analysis of the CPSF73 homolog in Haloferax, CPSFa, showed problems in the construction of a homozygous knock-out strain. A heterologous expression of the enzyme homolog in E.coli was optimized, and the protein was shown to be very unstable. Further initial analysis of in vitro functions showed binding to two known CPSF73-in vitro substrates.