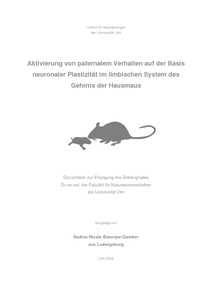 Ultrasound induced paternal care of male house mice (Mus muculus domesticus) does only occur in experienced fathers who take care for pups of their second litter. It was studied if the onset of paternal care and the ability to recognize pup ultrasounds and respond to them with retrieving behaviour is based on changes of the responsiveness (changes in motivation) or on an altered perception/cognition of the pup ultrasounds. Due to possible interactions between c-Fos and ERalpha; (alpha subtype of the estrogen receptor) in the paternal brain, it was determined which changes of ERalpha-IR (immuno-reactivity) and c-Fos IR occurred in regions of the limbic and the auditory brain by growing paternal experience and responsiveness. Furthermore it was investigated if cells that showed increased c-Fos activity after ultrasound perception also contained ERalpha. Therefore experienced and unexperienced fathers and territory cannibals were exposed to an artificial ultrasound stimulus and their brains were double immunolabelled for the c-Fos and ERalpha proteins. There were no staining differences in the auditory cortex between experienced and unexperienced fathers suggesting that the ultrasound recognition does not occur due to an altered auditory cognition. The labelling changes found in the limbic areas do support the hypothesis of Numan and Stolzenberg (2009) of the existence of two neuronal circuits that are involved in generating parental behaviour. It appears that pup contact effects neuronal changes in unexperienced fathers to maximize the paternal motivation. After an altered parental circuit is fully established there is no more increased c-Fos activity and ER-IR necessary to generate paternal behaviour. This indicates that the ability of ultrasound recognition depends on parental motivation. Futhermore it seems that the neuronal changes that allow full paternal responsiveness and ultrasound induced pup retrieving behaviour are only to a small extend estrogen receptor mediated.