The impact of vascular lesions in dementia 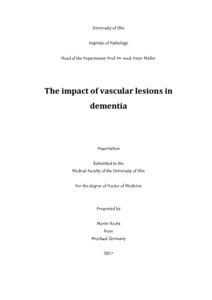 Vascular dementia (VaD) is a heterogeneous group of brain lesions and vessel disorders. Brain infarcts, microinfarcts, strategic infarcts and white matter lesions have been discussed to play a role. Several different vessels disorders and embolic events can cause these vascular brain lesions. As dementia caused by a single pathology is rarely seen in the elderly brain, vascular lesions are expected to co-occur in cases of neurodegenerative disorders. Therefore, it was necessary to evaluate the impact of vascular lesions in concert with Alzheimer’s Disease (AD)-related pathology in an autopsy study. Here, we studied 212 human autopsy cases for the impact of vascular lesions and underlying vessel disorders in the development of dementing disorders. Macroscopic and microscopic examinations were performed. Clinical data were analyzed to assess the degree of dementia. Types of infarcts and vessel disorders were investigated for its relation with age and prevalences in different age categories. Logistic and linear regression models were applied to clarify the interplay between the pathologies. Atherosclerosis (AS), small vessel disease (SVD), and cerebral amyloid angiopathy (CAA) were shown to be associated with age analyzing distinct prevalences in age categories of this sample. Only the frequency of allocortical microinfarcts increased with age whereas other types of forebrain infarcts showed no significant differences in prevalences of age-related subgroups. AD-related τ- and Aβ-pathology appeared to be the main variables to explain cognitive decline in the elderly. Strategic infarcts/ microinfarcts in the CA1-subiculum region, thereby, contributed significantly in the development of dementia. Gross infarcts and lacunar infarcts had no major impact on the development of dementia, but associations with AS and SVD were shown. The only vessel disorder that had an effect on the dementia-related hippocampal microinfarcts was capillary CAA whereby CAA-affected capillaries were often found outside the infarct presumably exhibiting an important prerequisite for hypoperfusion. Taken together, capillary CAA contributes to the development of dementia probably due to hypoperfusion-induced hippocampal (strategic) microinfarcts. Thus, capillary CAA- and its associated type of Alzheimer’s disease are associated with microinfarcts and hypoperfusion in the hippocampus, which is essential for memory function. Other vessel disorders could not be targeted as major independent contributors to the vascular component of dementia presumably because they spare most frequently the hippocampal formation.