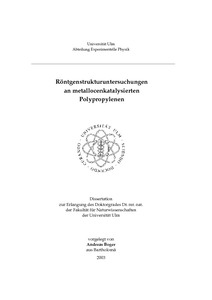 The subject of this thesis is the examination of the properties of polypropylene (PP) with different amount of isotacticity. The presented measurements show the large range of properties of polypropylene: lasting from plastic, semi-crystalline to highly elastic X-ray-amorphous. The lower the crystallinity, the higher the elasticity of the samples. Thus, the x-ray-amorphous sample achieves a complete resetting of the strain after the first drawing cycle. The stress-strain behavior of the sample was described by the Van der Waals model for polymers. By the dynamic-mechanical measurements the complex compliance was determined in dependence of the temperature, frequency and shear amplitude. Here the observed phase transitions could be correlated with the DSC measurements. Thereby, the amorphous X-ray sample turns out to have a great capability as rubber material; its rubber plateau extending over a temperature range of 150K. In order to decide which processes are responsible for these transitions, temperature dependent WAXS and SAXS measurements were performed. For this purpose, setups at the polymerbeamline in the HASYLAB at DESY were realized, which permitted efficient measurement periods with an accuracy comparable to Guiniertechnique. The high accuracy of +/-0.5 Grad in the scattering angle also allowed for a reflex analysis, by which the crystallite size was determined in dependence of the temperature and the crystal modifications. The results of these measurements led to an explanation of the reason for the calorimetry transitions. The investigation of the superstructure under uniaxial drawing revealed clearly the transition from a lamella structure to a fibrillae structure. Furthermore, the atomic structure and the superstructure as well as their orientation under uniaxial drawing were examined. Thereby, the change in crystallization became apparent and, in particular, a strain induced crystallization for the low crystalline samples could be observed.