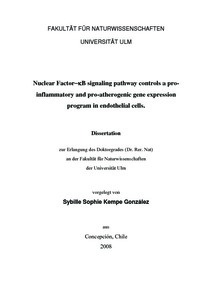 Activation of the transcription factor NF-kappaB is a critical step for tumor necrosis factor-alpha-induced inflammatory response. In the present study human microvascular endothelial cell line-1 cells were modified to express dominant interfering mutants of the IKK/NF-kappaB signaling module and expression profiles were determined. The results presented in this thesis provide compelling evidence for the virtually absolute dependence of TNFalpha-induced genes on NF-kappaB canonical signaling. Genes with a critical role in inflammation and in atherogenesis were identified. The endothelial lipase gene, a key enzyme involved in lipoprotein metabolism, was investigated in more detail. A direct regulation of the endothelial lipase promoter by NF-kappaB dimmers was found. Given the important physiological role of this enzyme, a transgenic mouse model based on the tetracycline-modulated expression system was further developed. In this system, human endothelial lipase gene was conditionally over-expressed in endothelial cells through the response of cell-specific vascular endothelial-cadherin promoter. Preliminary data obtained from these transgenic mice are presented in this thesis. Finally, the expression of a highly up-regulated gene in the endothelial cells gene expression profile, Epstein-Barr virus-induced gene-3 (Ebi3), was investigated in human atheroma plaques. The evidence obtained implicates for the first time Ebi3 protein and Ebi3-related cytokines in atherosclerosis. Given its important immunomodulatory functions, Ebi3 represents an interesting target for therapeutic manipulation in atherosclerosis. In sum, the data presented in this thesis suggested that targeting the IKK/ NF-kappaB pathway or specific genes downstream, such as endothelial lipase or Ebi3, may be effective for the control or prevention of chronic inflammatory diseases such as atherosclerosis.