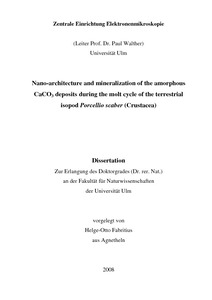 Most crustaceans use CaCO3 for hardening their cuticle in order to provide stability for their exoskeleton. During ecdysis, most of the calcium is lost with the exuvia and must be replaced by absorption of the mineral from the environment. To minimize calcium loss, terrestrial isopods have evolved mechanisms for mineral conservation strongly linked to their biphasic molt cycle. During premolt, Porcellio scaber stores large amounts of CaCO3 from the posterior cuticle in deposits located between epithelium and cuticle of the first four anterior sternites. After the posterior molt, the deposits are resorbed and the mineral is used to harden the new posterior cuticle. The sternal deposits of P. scaber consist of three structurally distinct layers: a distal spherular layer with small, partially fused spherules, a proximal spherular layer consisting of free spherules and a homogenous layer. Ultrastructural investigations of deposit formation and degradation show that the formation of spherules is initiated within a specialized aggregation zone by the formation of granular nano-particles consisting of mineral and organic components provided by the anterior sternal epithelium. The mineral phase is ACC, which is stabilized by the proteinaceous organic matrix. Concentric growth of the spherules takes place in a growth zone extending several µm distal to the aggregation zone. In all three deposit layers the organic matrix forms concentric reticules connected by radial strands. The transition between the layers can be explained by a reduction of the number of spherule nucleation sites during deposit formation. Such a change in the number of spherule nucleation sites during CaCO3 deposition has probably also lead to the development of two and three layered deposits from primordial single layered deposits during the evolution of terrestrial isopods.