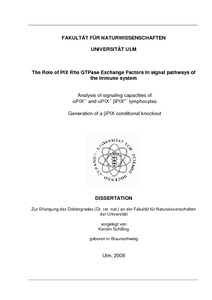 In this work, alpha PIX knockout mice were analyzed to elucidate the role of alpha PIX in the hematopoietic system focusing on signaling events downstream of the B cell receptor (BCR). Alpha PIX plays a pivotal role in restricting mature lymphocytes and marginal zone B cell numbers in the spleen. Immune responses were reduced in alpha PIX-deficient mice. Alpha PIX-deficient lymphocytes had a profound defect in proliferation after antigen receptor stimulation. Additionally, a severe reduction in antigen receptor induced phosphorylation of PAK1/2 was detected in immunoblots and in immunofluorescence of the immune synapse of T cells. These results showed the important signaling role of alpha PIX downstream of the antigen receptor and its role to activate PAK proteins. Furthermore, we discovered a profound reduction in full-length GIT2 protein levels in alpha PIX-deficient lymphoid cells. We excluded an involvement by alpha PIX in GIT2 transcription and concluded that alpha PIX is important for stabilizing GIT2 protein, possibly by forming a degradation-insensitive complex. Using transwell migration analysis, we showed a pivotal role for alpha PIX in restraining lymphocyte migration, similar to what has been observed for GIT2, and is likely due in part to reduced GIT2 protein levels. Beta PIX is a close homolog of alpha PIX that is also highly expressed in lymphoid cells. We hypothesized that beta PIX might compensate for alpha PIX in alpha PIX-deficient mice. Therefore, we included alpha PIX-/- beta PIX+/- mice in our analyses and found a greater defect in immune responses than in alpha PIX-deficient mice. This finding confirmed a compensatory role for beta PIX in the absence of alpha PIX. A second focus of this work was the generation of a conditional beta PIX knockout mouse that would allow us to analyze beta PIX in the immune system and to generate alpha PIX-beta PIX double knockout mice to analyze PIX proteins in immunity.