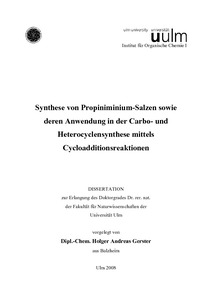 In this thesis new propyne iminium salts 120 were synthesized and their use as 2-pi-component in cycloaddition reactions were investigated. Before this, only preliminary studies on Diels-Alder reactions of acetylenic iminium salts, none about behaviour in 1,3-dipolar cycloadditions had been performed. The results reported here show that they are useful and powerful building blocks for the synthesis of carbo- and heterocycles using the cycloaddition approach. [3+2]-Cycloaddition reactions with various 1,3-dipoles proceeded highly regioselectively. By comparison, salts 120 were much more reactive than the isoelectronic ketone 153a, sometimes even showing completely different reaction behaviour, as was observed in the reaction towards münchnones. Heavily substituted pyranones were synthesized in a one-step procedure. Thermolabile heterocycles, which could not be obtained directly by cycloaddition of ketone 153a, were synthesized using iminium salts 120 followed by hydrolysis. Spontaneous rearrangement of Delta-4-isoxazolines, isolated from the cycloaddition of nitrones 147 and salts 120, resulted in dihydroimidazolium salts 295, which were nearly unknown up to date. Heating them gave rise to highly substituted imidazolium salts 300, an approach to this class of heterocycles which has not been used before.