Early changes in immune, coagulation, and organ function after clinical and experimental polytrauma 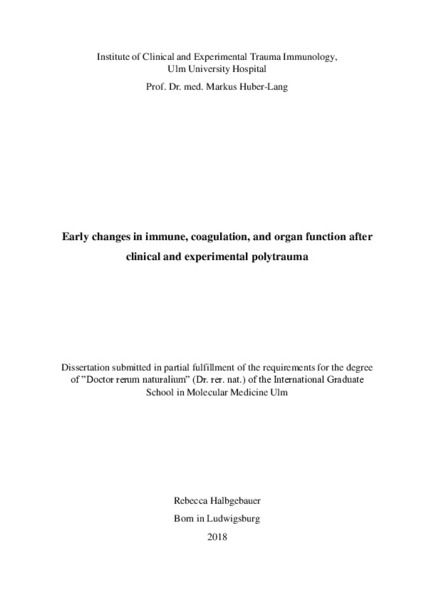 Despite the considerable progress made in public safety measures, emergency and intensive care in the last decades, trauma remains a major medical issue and is responsible for a large number of deaths worldwide particularly in young people. In regard to the posttraumatic immune response, development of disturbances in coagulation, and detection and monitoring of end organ damage, several issues remain unresolved. Therefore, this thesis focused on the alterations in peripheral blood leukocytes as “first line of defense” after severe injury employing static and functional analyses. Furthermore, disturbances in coagulation were observed over a 10-day time course after trauma. In a larger patient cohort, the impact of an additional hemorrhagic shock on inflammation, organ damage, and breakdown of the endothelial glycocalyx was assessed. These findings were re-translationally evaluated in a murine model of isolated and combined trauma and hemorrhage. In patients after severe trauma, peripheral leukocytes rapidly changed their surface expression profile of several receptors for complement activation products as well as damage- and pathogen-associated molecular patterns, involved in regulating the immune response, but also modulators of coagulation. In a pilot study, a highly standardized ex vivo testing system revealed defects in production of early pro-inflammatory cytokines such as tumor-necrosis factor and interleukin-1b upon incubation with microbial endotoxin in monocytes, but not in the lymphocyte function after severe injury. A shortened standardized exposure time (4 h) resulted in a similar immune response compared to the established incubation protocol. After further validation and optimization, this method might offer a useful tool to monitor the immune system’s remaining capacity to react to inflammatory or pathogenic stimuli. In a similar approach, functional monitoring of coagulation over the time course after injury detected striking defects in coagulation immediately after trauma which partly lasted until 10 days later, but no hyperfibrinolysis was found. In a larger patient cohort, hemorrhagic shock was demonstrated to significantly contribute to posttraumatic inflammation and organ damage. Despite comparable injury severity, patients after blood loss had increased serum concentrations of specific damage markers of the lung (Clara cell secretory protein), liver (liver-type fatty acid-binding protein), kidneys (neutrophil gelatinase-associated lipocalin) and the intestine (intestinal fatty acid-binding protein) in distinct spatial and temporal patterns. Furthermore, presumably by increased generation of matrix metalloproteinases-9 and -13, there was an elevation of circulating components of the glycocalyx such as syndecan-1 and heparan sulfate, suggesting endothelial damage and increased permeability. Interestingly, increased concentrations of elements of the intestinal mucus (mucin-2) were detected after trauma/hemorrhage, implying a deterioration in intestinal barrier function. In vitro experiments revealed that the detected amounts of glycocalyx as well as intestinal mucus components were able to interfere with coagulation, indicating that the posttraumatic barrier breakdown might also impair clotting and increase the risk of bleeding. These findings were mostly confirmed in a murine model of PT and hemorrhage, where shock alone already demonstrated marked impact on barrier dysfunction and glycocalyx breakdown. The data is indicative of an early development of barrier and organ damage, presumably hours to days before manifestation of barrier breakdown and organ dysfunction. Monitoring the posttraumatic course using novel organ damage markers in addition to traditional functional scores may aid to detect subpar tendencies before onset of (multiple) organ dysfunction. In conclusion, severe trauma leads to significant alterations in leukocyte and immune function, coagulation, and considerable barrier and organ dysfunction which is worsened in the presence of a hemorrhagic shock. Reliable monitoring of the clinical course using valid functional markers and assays as well as rapid implementation into clinical routine and advanced treatment strategies may be decisive for improved outcome.