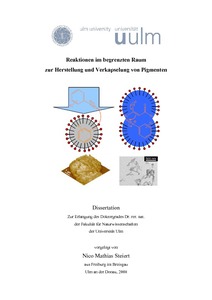 The PhD thesis shows that various reactions can be conducted in a miniemulsion: They can take place in the nanodroplets of a miniemulsion, but - in case of reaction partners that are characterized by a different hydrophilicity - also on their surface. The described production of a dispersion dye in a direct miniemulsion for the first time displays the formation of single-phase nanoparticles by an interfacial reaction in miniemulsion. Reactions of substances of similar hydrophilicity that already take place at room temperature can be triggered by co-sonication of two miniemulsions, whose droplets separately contain the reaction partners. In this way, azo pigment nanoparticles were produced in an inverse miniemulsion from hydrophilic coupling partners. If one co-sonicate an aqueous dispersion of a hydrophobic pigment and a direct miniemulsion that contains hydrophobic monomer droplets and subsequently polymerize the system, pigment nanoparticles that are encapsulated by polymer are obtained. Thereby, the reaction geometry is limited to the monomer layers that are adsorbed on the pigment surface. This dissertation describes the encapsulation of two organic pigments, more precisely an azo pigment and a quinacridone pigment, and of a carbon black pigment with different polymer materials. The built hybrid particles can subsequently be used for the production of pigmented coatings being characterized by high gloss. Accordingly, the carbon black/polymer-hybrid particles were used for the formation of a black polymer coating.