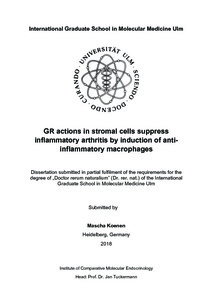 Rheumatoid arthritis (RA) is a severe inflammatory autoimmune disease affecting approximately 1% of the world’s population and glucocorticoids (GCs) are still among the most frequently prescribed drugs to suppress inflammation in RA. However, GCs are under constant clinical audit due to detrimental side effects on bone homeostasis and metabolism, thus, revealing the necessity to improve treatment strategy. Although many studies have been conducted, the understanding of the critical cell types, especially considering the role of non-immune cells and their cross talk with other cells, a prevalent characteristic of RA, is still surprisingly vague. The glucocorticoid receptor (GR) is a ligand-induced transcription factor that can act as a monomeric or dimeric molecule. A longstanding view considered repression of cytokines by the GR monomer in immune cells as the pivotal mechanism; however, here we show that cytokine suppression is mostly GR dimer-dependent but insufficient to suppress serum transfer-induced arthritis (STIA). Moreover, we demonstrate that GR dimers instead are crucial to mediate anti-inflammatory effects in non-immune cells, specifically fibroblast-like synoviocytes (FLS), to induce anti-inflammatory macrophages. GC treatment of co-cultures of FLS and macrophages revealed a GR dimer-dependent induction of the ability to clear an apoptotic cell burden, a process called efferocytosis. Strikingly, efferocytosis and anti-inflammatory macrophages are reported to mediate the spontaneous resolution of STIA and thus, GCs might induce the same processes involved in spontaneous resolution of inflammation. Interestingly, we further could show that GCs suppress osteophyte formation in STIA in a GR dimer-dependent mechanism, however, in contrast to inflammation, this process essentially requires GR in immune cells. Taken together, we identified a major role for GR dimers in FLS to suppress arthritis by GCs through regulating the interplay of these FLS with macrophages. Exploiting the GC-induced anti-inflammatory cross talk between FLS and macrophages will provide novel rationales for therapies with higher efficiency and may avoid adverse side effects of steroid therapy.