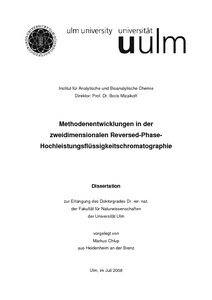 In this thesis, methods for the separation of complex mixtures of ionogenic compounds such as analgesics, tricyclic antidepressants or phenolic antioxidants by comprehensive two-dimensional high performance liquid chromatography were developed using different ways for the generation of the necessary selectivity differences of the two involved separation systems. The methods were based on reversed-phase (RP) systems generating selectivity differences either by changing the stationary phase or the mobile phase pH value. For the transfers of the fractions from the first to the second dimension online fraction transfer techniques such as stop-flow or dual-loop fractionizing were used. The first part of the thesis focused on basic aspects of comprehensive 2D HPLC such as small particle columns, retention behaviour of ionogenic compounds at different mobile phase pH values, the influence of ion pairing reagents or detector cell geometries for monitoring detectors. Here some general problems using columns with small particles could be investigated. In the second part of the thesis a mixture of analgesics and tricyclic antidepressants was separated with 2D HPLC by drastically changing the mobile phase pH value from the first to the second dimension. The necessary conditions were investigated and optimized for this separation. It was shown that the adaptation of the pH value from the first to the second dimension could be achieved very quickly. It was possible to separate the compounds nearly completely from each other. Phenolic antioxidants were separated in the last part of the thesis by changing the stationary phase from the first to the second dimension. The aim was the generation of two-dimensional separation patterns for the comparison of real samples containing phenolic antioxidants, e.g. tea. It was possible to generate different separation patterns of tea samples showing some similarities.