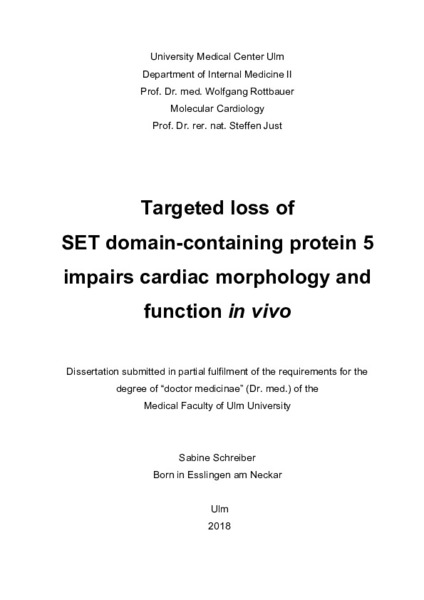 Cardiovascular diseases are the leading cause of death worldwide. Changes in chromatin structure alter gene expression and drive cardiovascular disease pathogenesis. The SET ((Su(var)3-9), enhancer of zeste (E(z)) and trithorax (Trx)) domain-containing protein family is such a group of chromatin modifiers, who are known to methylate histones. The SET domain-containing protein 5 (setd5) is a member of this family and was previously connected to cardiovascular disease generation in mouse. The purpose of the presented thesis was to further characterize the role of Setd5 in vertebrate heart development. Since embryonic mice are not viable without a functional cardiovascular system, the zebrafish was chosen as a model organism because of its ease of genetic manipulation and the ability to survive without a functional cardiovascular system. Setd5 deficiency, generated by Morpholino-modified antisense oligonucleotide injection in zebrafish embryos, resulted in severe cardiac defects. Although no impairment in heart differentiation and specification was evident, the observed heart morphology was highly altered. Atria appeared stretched and thin, whereas the ventricle presented a compact and lumpy conformation. Functional analysis showed that Setd5 is essential to maintain cardiac contractile function in zebrafish. Loss of Setd5 led to a distinct phenotype, mainly a silent ventricle and atrial arrhythmia. Analysis of the cardiac conduction system showed regular excitation propagation in the atrium and dysfunctional electrical excitation of ventricular cardiomyocytes. Focusing on chromatin modification, knockdown of setd5 led to increased methylation and reduced acetylation of histones. In conclusion, loss of setd5 impairs cardiac morphology and function in vivo.