Diagnosis and prognosis of disorders of consciousness : Classification and prognostication of clinical outcome of patients after traumatic and non-traumatic brain injuries 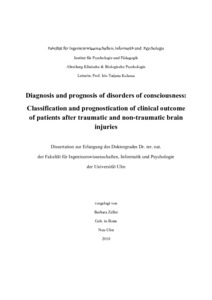 The improved medical care for craniocerebral injuries caused by traumatic or non-traumatic events leads to a constantly increasing number of patients who remain in a changed state of consciousness after intensive medical treatment. Usually the first stage is the Unresponsive Wakefulness Syndrome (UWS), which may change into a Minimally Conscious State (MCS) from which patients may eventually regain full consciousness. Especially for UWS patients the early detection of first signs of consciousness could support the creation of individual treatment plans. However, in addition to the classification of disorders of consciousness, the prediction of the clinical course is also an important point in the daily lives of practitioners and, above all, the relatives of patients. The thesis deals with the question of how reliably different electroencephalographic (EEG) parameters can determine consciousness in these patients and whether a regaining of consciousness in these patients can be predicted by EEG markers identified in ERP and resting-state EEG data. To this end, it was examined how reliable event-related potentials (ERP) can be measured in patients with impaired consciousness (Study 1, Schorr et al., 2014) and whether UWS patients can be distinguished from MCS patients on the basis of these measurements. Patients were tested with an oddball paradigm several times on the same day and on different days. In the next step, connectivity, more precisely, coherence, i.e., the synchronous activation of different brain areas, was examined in UWS and MCS patients. On the one hand, with regard to the differentiation between these two states of consciousness and on the other hand with regard to the significance of coherence patterns for the course of the disease. EEG data from 73 patients was evaluated (coherence within parietal and frontal brain areas and coherence between frontal and parietal lobe) and patients were reassessed after one year to determine the current state of consciousness (Study 2, Schorr et al., 2016).The aim of the last study was to compare the usefulness of different EEG parameters, to distinguish between non-reactive and minimally conscious patients and to predict an improvement in the state of consciousness. For this purpose, already established methods (such as coherence, power analysis, entropy, microstates and complex network analyses) were compared together on a single data set for the first time and an attempt was made to determine whether an automated prediction is possible (Study 3, Stefan et al., 2018). In summary, it was demonstrated that a) the occurrence of ERPs is subject to strong fluctuations and this is reflected in a low retest reliability; a lack of ERP could be quickly interpreted as a lack of awareness, which could be prevented by repeated measurements at short time intervals; it was also demonstrated that b) coherence, power analysis, entropy, microstates and complex network analyses all predict the recovery of consciousness in UWS patients, and that c) an automated classification scheme can be used to predict recovery from UWS. The results suggest that the above measurements might be useful as biomarkers in predicting a positive course of unconsciousness disorders. This work lays the foundation for further research to apply the methods described on an individual basis in the future.