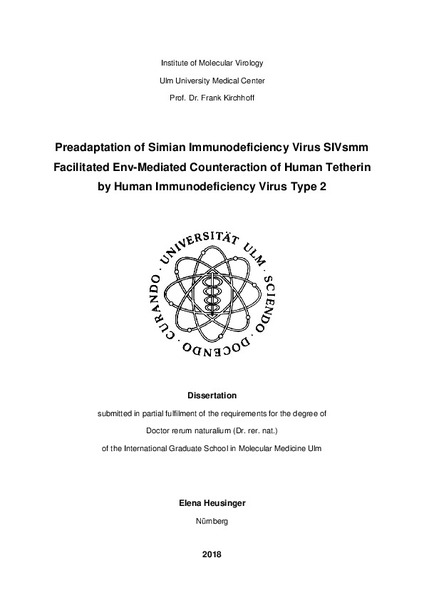 The host restriction factor tetherin inhibits the release of many enveloped viruses including HIV from infected cells. Since tetherin is often counteracted in a species-specific manner, it poses a barrier to successful zoonotic transmission of various viruses. For example, evolution of anti-tetherin activity was an important adaptation after zoonotic transmission of human immunodeficiency virus type 1 (HIV-1) from apes to humans. The direct precursors of HIV-1, simian immunodeficiency viruses (SIVs) infecting Central chimpanzees and Western lowland gorillas, utilize their Nef (negative factor) proteins to antagonize tetherin in their respective host species. However, these Nef proteins are unable to counteract the human ortholog due to a protective deletion in its cytoplasmic tail. In order to spread successfully in the human population, HIV had to overcome this hurdle. Intriguingly, only pandemic HIV-1 group M and epidemic group O evolved potent antagonists of human tetherin, while rare groups N and P fail to efficiently counteract this restriction factor. In contrast to HIV-1, HIV-2 groups A to I originated from nine independent cross-species transmission events of SIVsmm infecting sooty mangabeys to humans. Similar to SIVcpz and SIVgor, the Nef protein of SIVsmm counteracts tetherin of its natural host. In case of epidemic HIV-2 group A viruses, the viral envelope (Env) protein has been shown to counteract human tetherin, whereas Nef was inactive in this function. However, it has remained unclear how/whether the remaining groups of HIV-2 counteract this antiviral protein and how tetherin may have affected the evolution and spread of HIV-2 in humans. Furthermore, it remained unclear whether differences in other immunomodulatory activities of the multifunctional protein Nef may have contributed to the differential spread of rare and epidemic groups of HIV-2. To address these questions, I analyzed the anti-tetherin activity and other immunomodulatory properties of Nef and Env proteins representing HIV-2 groups A, B, AB, F, G, H and I, as well as their SIVsmm counterpart. By infecting human peripheral blood mononuclear cells (PBMCs) with viruses expressing heterologous Nef proteins, I found that the ability to down-modulate cell surface expression of the T cell receptors CD4 and CD3 is highly conserved between Nef proteins of HIV-2 and SIVsmm. In contrast, the effects on CD28, MHC-I and CD74 varied considerably. Yet, there was no obvious association of immunomodulation with viral spread. Furthermore, HIV-2 and SIVsmm Nefs generally showed little if any ability to increase virus release from infected PBMCs and transfected HEK293T cells. Thus, HIV-2 Nefs did not adapt to human tetherin. Conversely, I found that not only Env glycoproteins of HIV-2 group A, but also those of groups F, G and I as well as a circulating recombinant form (CRF_AB) are able to decrease tetherin surface levels and to increase virus release from infected PBMCs and transfected HeLa cells. In addition, Envs of several lineages of SIVsmm antagonize human tetherin as efficiently as HIV-2 Envs. Notably, most SIVsmm strains analyzed represent primary isolates that were never passaged in human cells. Thus, tetherin antagonism did not require human-specific adaptations in SIVsmm Env. In line with this, SIVsmm Envs were also active against sooty mangabey tetherin. Thus, my data show that SIVsmm encodes two tetherin antagonists: Nef and Env. While Nef is inactive against human tetherin, Env counteracts it without human-specific adaptations. This preadaptation of SIVsmm helps to explain why this virus has crossed the species barrier from sooty mangabeys to humans on at least nine occasions.