The reproductive biology of euglossine-pollinated plants in the natural reserve Nouragues, French Guiana 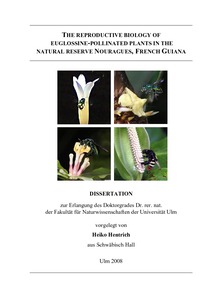 The reproductive biology of several euglossine-pollinated species of an understory community in the natural reserve Nouragues in French Guiana were studied. The first two chapters deal with the pollination biology of three sympatric, co-flowering aroids (Anthurium sagittatum, Anthurium thrinax and Spathiphyllum humboldtii). Each of the studied species possessed a specific floral scent bouquet that attracted species-specific pollinators. The pollinators were male euglossine bees, which collected floral scent at the spadices of the plants. Floral scent might be a major factor in the reproductive isolation of these plant species. In the third chapter, the reproductive biology of three myco-heterotrophic Voyria species (Gentianaceae) was studied. Voyria clavata was highly specialized in its floral biology towards middle-sized, long-tongued euglossine bees, while V. caerulea and V. rosea had a broader visitor spectrum (long-tongued insects). The results of our study indicate that the former species was obligate xenogamous, while the latter were facultative inbreeders. For understory plants, whose individuals are widely spread in the forest, close pollinator-plant relationships might be of major importance for a successful reproduction. The fourth chapter deals with the reproductive biology of a plant community of euglossine-pollinated nectar- and pollen-plants. Visitor spectra of the plants were as restricted as in euglossine-pollinated perfume-flowers. Important factors affecting the visitor spectrum were floral morphology (e.g. corolla length) and daily floral nectar amounts. Interestingly, also the pollen flowers were visited by few euglossine species. This might indicate that euglossine bees are flower constant or even oligolectic. The most frequently observed flower visitors were bees of the Euglossa subgenus Glossura, which are known to be the most individual-rich euglossine group. Probably many plant species have evolved and specialized under their influence.