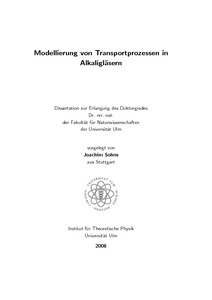 We propose two different models for the ion transport in ion conducting glasses. The starting point of our first model is a many-particle Fokker-Planck equation for the distribution function of the ions. The ions interact with each other and with the glass particles. The interaction with the glass is modelled by stochastic, time independent potentials. This distribution function is the solution of a Vlasov-Fokker-Planck equation. Additionally we calculate the diffusion coefficient of the charge center in the framework of an effective two-particle model. We find that the conductivity of the system depends in a non-linear way on the concentrations of the different ions and on their composition ratio. Although these calculations differ from the mixed alkali effect, the analytical results give a possible explanation for the weak mixed alkali effect. Our second model includes the dynamics of the ions as well as the dynamics of the glass structures. The linear response to an external electrical field and the dynamic structure factors of the glass are calculated in the framework of the Keldysh technique. There is a strong coupling of the two-particle Green’s functions and the one-particle Green’s functions. The Green’s functions are approximated by perturbation theory up to second order. Because of different scattering processes, the lifetimes of the one-particle states are finite and depend on the concentrations and on the composition ratios of the different ingredients. The analytically calculated conductivity depends in a non-linear way on the concentrations of the alkali ions, which fits very well to the experimental data for low concentrations. The calculated conductivity of mixed alkali glasses shows a mixed alkali effect, which is also in qualitative accordance with the experimental results. Additionally, our model predicts a nonlinear dependence of the conductivity of mixed anion glasses on the composition ratio.