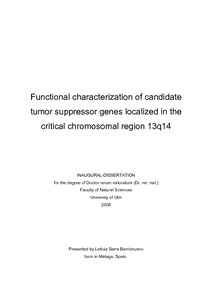 To elucidate the possible role of candidate protein-coding genes in 13q14 in the pathomechanism associated with deletion of this region (the most common genomic abnormality in CLL), the possible functions of the five candidate proteins C13orf1, RCBTB1, SETDB2, RFP2 and KPNA3 were analyzed. The results of their intracellular localization and interaction partners lead to the characterization of some of the cellular pathways the proteins could be related to. For localization, specific antibodies were produced in guinea pigs and mice, and for the interaction partners a Y2H screen was performed. The localization proved to be in accordance with their assigned putative functions based on homology. By Y2H, not only novel candidate partners were found, but also interactions of the proteins with each other. Furthermore, 36 % of the identified partners interacted with three or more 13q14 proteins further supporting the hypothesis of functional relations among the analyzed 13q14 proteins. Validation was performed by pull-down experiments for 8 selected candidate interaction partners (eEF1A, eEF1G, EED, CRMP-1, RXRA, GNB2, C11Orf2 and RIPAIN) that related the 13q14 proteins to cellular processes like protein translation, regulation of gene expression, signal transduction and apoptosis, thereby linking them to possible pathways that could be involved in malignancy. In conclusion, the work presented here shows that the 13q14 proteins a) localize corresponding to their predicted functions, b) fit to a model of a functional cluster and involvement in the same cellular pathways, and c) affect pathways which are involved in the development of malignant phenotypes. These findings and the tools developed in this work (like the antibodies) constitute a basis for further studies towards the characterization of the functions of 13q14 candidate proteins and their possible roles in the development of cancer.