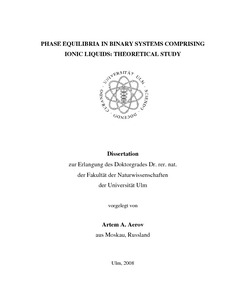 In the thesis some properties of binary systems comprising ionic liquids (ILs) are investigated theoretically by means of the Flory-Huggins approach. The thesis includes four original parts. It is demonstrated in the first part that the high solvent power of ILs may be caused by the incompatibility of their cations and anions. In the second part a phase boundary between an IL and a nonionic liquid (nIL) is investigated. It is analyzed how its width and surface tension depend on the affinity of the IL as a whole to the nIL and on the difference in the affinities of the IL’s cations and anions to the nIL. It is demonstrated that if the difference in affinities is nonzero a double electrostatic layer appears at the boundary. It is shown that surface tension of the boundary decreases with the increase of the difference in the affinities and when the difference exceeds a certain threshold value, the surface tension formally becomes negative. This implies that a microheterogeneous structure is to appear in the system. The possibility of the microheterogeneous structure formation is analyzed additionally in the third original part. Therein a possibility of the microphase separation in a homogeneous IL/nIL mixture is investigated. The results obtained in the third original part corroborate the results obtained in the second part. The fourth original part of the thesis is devoted to the study of the swelling of a microgel with immobilized carbon nanotubes in an IL. It is proved in it that the swelling ratio of the microgel with immobilized carbon nanotubes depends on its size if there is a difference in affinities of the IL’s anions and cations to the network of the microgel. Namely, if the affinity of the IL as a whole to the network is a bit higher than the one-component solvent affinity at which the microgel would collapse, then a smaller microgel is in the collapsed state and a larger microgel is in the swollen state in this IL.