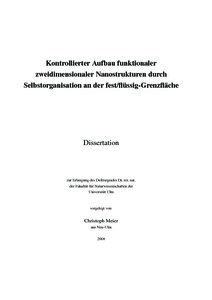 The first part of the thesis is concerned with the influence of adsorbate-adsorbate and adsorbate-substrate interactions on the self-organization behaviour of oligopyridine derivatives at the solid/liquid interface. The adsorbate-adsorbate interactions, attributed to pyridine hydrogen bonds in the networks, were modelled with pyridine and terpyridine interactions by means of ab initio calculations. The influence of adsorbate-substrate interactions on the self-organization were examined with phenylene extended oligopyridine derivatives. The expansion of the aromatic system leads to stronger adsorbate-substrate interactions compared to the origin compounds. The influence of additional nitrogen atoms to the self-organization behaviour was investigated with a pyrazyl functionalized oligopyridine derivative which adsorbs on the surface into enantiomorphous, two-dimensional racemic domains. Subsequently, the control of the self-organization behaviour at the solid/liquid interface via variation of the concentration is described. The second part of the thesis deals with the functional aspects of supramolecular monolayers. Hierarchically self-organized architectures of porous oligopyridine networks are presented, whose functionalities are solely attributed to the network properties. The outstanding properties of a host network were utilized to manipulate individual guest molecules in a defined manner. Besides the tip controlled desorption, the tip controlled adsorption of guest molecules into the network is described. Finally, the self-organization of functional molecular building blocks is described. An oligoamide, possessing guanidinium receptor capabilities, was immobilized at the solid/liquid interface via alkyl substituents and preserves its guanidinium receptor functionality at the interface. In contrast, an eicosyl substituted hexapyridinium cation forms lamellar structures at the solid/liquid interface, with the molecules in an upright standing orientation.