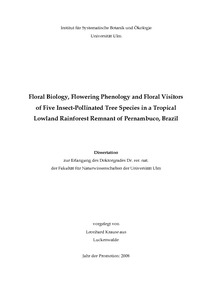 Reproductive processes of frequent canopy tree species that persisted up to now in the few remnants of the Brazilian Atlantic forest might be thought to be robust. To test this hypothesis, the reproductive biology, flowering phenology, and the floral visitors of Tapirira guinanensis (Anacardiaceae), Ocotea glomerata (Lauraceae), Trichilia lepidota (Meliaceae), Sclerolobium densiflorum (Fabaceae), and Eschweilera ovata (Lecythidaceae) were studied in a 319 ha forest fragment 30 km north of Recife, Pernambuco, Brazil. Insect visits were essential for all species to form fruits. T. guianensis, O. glomerata, and T. lepidota were dioecious and showed no apomixis. The other species were hermaphrodite but auto-incompatible (S. densiflorum) or auto-compatible without spontaneous self-pollination (E. ovata). T. guianensis showed "multiple bang" flowering, triggered and synchronized between the sexes by single rainfalls. In that species, the high flower number excess in the inflorescences of male trees is suggested to guide pollinators first to male and then to female trees during the few days of flowering, compared to the low male excess in O. glomerata and T. lepidota that flower many weeks. Fruiting in S. densiflorum was inhibited by florivore attacks and by lack of flowering in two years. HPLC analysis showed that the nectar of T. guianensis is dominated by hexoses, and that of O. glomerata and E. ovata by sucrose. T. lepidota showed an equilibrated sugar composition. Floral scent compositions obtained by GC-MS analysis are provided for T. guianensis, O. glomerata, and T. lepidota. The spectrum of floral visitors in E. ovata was narrow, impoverished, and specialized, with Xylocopa frontalis (Xylocopini, Apidae) causing more than 80 % of the fruit set, whereas that of the other tree species was more generalist and diverse. The results indicate that even in apparently robust tropical tree species reproductive processes are highly complex and show a series of limitations.