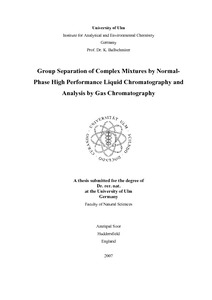 This work revolves around the group separation of complex mixtures found in the atmospheric compartment of the environment, by means of fractioning over a NP-HPLC system. Air was used as a complex matrix due to the vast number of compounds it contains. After trace enrichment of analytes by high volume sampling (HVS) a dedicated method for the group separation of esters of nitric acid (alkyl nitrates) was developed. A NP-HPLC system coupling a Perfluoro C8 column (Fluorous Technologies), with a Phenomenex RP-2 column and a Restek Allure Silica column, was developed. By combining these HPLC columns, it was possible for the first time to elute the alkyl organic nitrates into four distinctive groups (alkyl mononitrates and phenyl alkyl nitrates, alkyl dinitrates, carbonyl alkyl nitrates and hydroxy alkyl nitrates), with the possibility of eluting the phenyl alkyl nitrates as a separate group from the alkyl mononitrates. This backflush and fore-flush NP-HPLC system, has significant implications for the trace analysis of these compounds in the atmosphere as it allows the detailed HRGC analysis of each group of compounds which until now (as far as it is known) has not been possible. The analytical procedure developed was then utilised to group separate and estimate the levels of the persistent organic pollutants (POPs). The present study focuses on POPs in both marine air of the North Atlantic Ocean and continental air of one of Europe’s cleanest cities. Continental air samples were taken in Germany along with six marine air samples from the Island of Madeira. The levels of seven polychlorinated biphenyl (PCB) indicator congeners and six pesticides were estimated in all samples using the square regression fit in accompaniment with certified reference materials. Correlations were made for the seven indicator PCB congeners (28, 52, 101, 118, 138, 153 and 180) and the six pesticides (pentachlorobenzene, HCB, alpha-HCH, gamma-HCH, 4,4’ DDT and 4,4’ DDE).