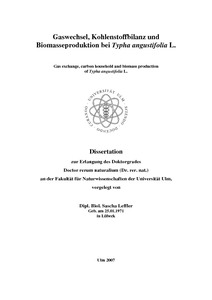 Typha angustifolia L. belongs to the group of aquatic emergent macrophyts. The species is widely spread in all types of wetlands and efficiently productive. By forming aerenchym the species is able to ventilate its roots and rhizomes in the rhizosphere and can withstand flooding. The Kuybyschew reservoir (Russia) was the area investigated in this study. Like many wetlands it fluctuates annually and periodically in their water level up to a maximum of 6 m. Little is known about the effect of such water-level fluctuations on the shore, especially in Typha angustifolia-dominated plant communities. The aim of the following study was to investigate the effect of water-level fluctuation with regard to productivity and biometry, CO2/H2O gas exchange as well as its carbon household in stands of Typha angustifolia. For this purpose two sites were set up at the Kuybyshew reservoir in three investigation periods from 2002 to 2004. The density, height, fruits, leaf area index and above-ground biomass were investigated. CO2/H2O gas exchange was measured. The daily carbon uptake was calculated. This was used to calculate the annual carbon household. Water-level fluctuation had a negative influence on above-ground biomass production and density of the stems. Furthermore CO2 uptake at the leaf surface did not correspond with photon flux density at any of the sites, water levels or during any investigation period. About 25 - 60 % of carbon of biomass did not derive from atmospheric carbon dioxide source. This negative carbon household might be explained by the ability of Typha angustifolia plants to use CO2 from the oxidation of methane by microorganisms. This is transported and accumulated in their aerenchym. Thus, they can maintain their carbon household. The results suggest that emergent macrophyts as Typha angustifolia are able to use carbon from the sediment as an additional carbon source. Thus, they play a major role in the carbon cycle of wetlands and the emission of trace gases.