Towards understanding the pathogenesis of polyglutamine disorders: mRNA and protein expression, proteolytic cleavage and proteasomal degradation 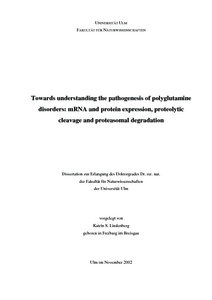 Huntington´s Disease (HD), spinocerebellar ataxia type 3 (SCA3) and 7 (SCA7) belong to a group of neurodegenerative diseases caused by an expansion of CAG trinucleotide repeats in the coding region of the affected genes. The CAG-expansion is translated into an expanded polyglutamine (poly-Q) stretch, altering the conformation of the mutant protein. In an expression analysis in human brain a widespread neuronal expression of ataxin-7 (a7) throughout the brain was identified, but a7 was not enriched at all sites of pathology. Three different mouse models for SCA7, expressing mutant or normal a7 either throughout the brain or exclusively in Purkinje cells or rod photoreceptors, respectively, were generated. In all models, a fragment of mutant a7 accumulated and formed inclusions. The mutant poly-Q protein in HD-huntingtin (htt) forms also intranuclear inclusions. For this protein the cleavage site and the responsible protease were identified. The cellular reaction to aggregated poly-Q protein was studied in SCA7 mouse brain and human SCA3 brain. Surprisingly, only in a minority of inclusions all elements thought to be essential for proteasomal degradation were assembled: no more than 30 % of inclusions displayed immunoreactivity against the 20S catalytical core of the proteasome, whereas most inclusions contained 19S antigens, suggesting an attempt to unfold aggregated protein. To test the hypothesis of an impairment of proteasomal degradation in poly-Q expressing cells, a proteasome reporter system was generated to study proteasomal degradation in vivo. An impairment of proteasomal degradation was shown with this construct. In summary, the cleavage of mutant poly-Q proteins is giving rise to fragments prone to aggregation. An altered degradation pathway involving an impaired unfolding and degradation are features shared by different poly-Q disorders and are potential targets for therapeutic interventions in neurodegenerative diseases.