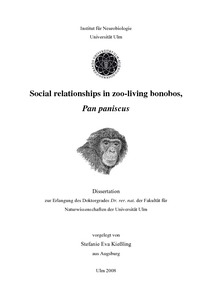 The study analyses the social relationships in zoo-living bonobos. The main aim of the study was to determine if there is a correlation between the vitality of a group and a keeping system which more closely resembles grouping patterns found in free ranging animals. The social and spatial behaviour in three different zoo-living groups was studied and compared to what is known of free-living bonobos. It is well documented that they live in flexible and fluid fission-fusion societies in the wild, in which members of the same community forage and travel in ever-changing parties. One of the groups studied (Frankfurt) was kept in an artificial fission-fusion environment; this group was compared to two others (Cologne and Plankendael) which were kept in constant groups. The question was, whether changing the group members often, as in Frankfurt, has a positive effect on the animal’s social relationships, noticeable by a higher rate of social and spatial proximity. The results of this study confirm assumptions that bonobos have a great ability to adjust to captive conditions and are able to display much of their natural behaviour in captivity (high adaptive potential). This being the case affirms the assumptions that also zoo studies are of invaluable importance towards understanding the social behaviour and social needs in this, the least studied, of the great apes. This study could also prove important to zoos keeping bonobos and other fission-fusion species, as it clearly shows that the artificial fission-fusion system used in Frankfurt increases the vitality and social dynamic in this group. This also raises the question whether bonobos have an intrinsic drive to leave/join groups to maintain sociability. Keeping long-term vital social groupings is, however, of great importance regarding future conservation efforts.