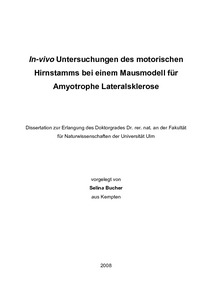 Amyotrophic lateral sclerosis (ALS) is a progressive, neurodegenerative disease caused by a selective loss of upper and lower motorneurons. While approximately 90 % of all ALS cases are sporadic (sALS), 10 % are familial ALS (fALS) and linked to an autosomal dominantly inherited mutation. Furthermore, in about 15 - 20 % of those fALS cases, a mutation in the Cu / Zn superoxide dismutase 1 (SOD1) gene has been found. A transgenic mouse model with a G93A-SOD1 mutation was developed, where the clinical and neuropathological symptoms are similar to a human selective anterior horn cell degeneration. Magnetic resonance imaging (MRI) provides a good tool to study the progression of the disease in vivo. T2-weighted MRI of transgenic G93A-SOD1 mice already revealed alterations in the brainstem. I applied MRI to evaluate the progression of the disease in the brainstem of the G93A-SOD1 mouse model. In the brainstem of G93A-SOD1 mice the facial, hypoglossal and trigeminal nuclei were identified as hyperintensities. The T2 values of these nuclei were significantly increased, as early as the age of 80 days, i.e. before the average disease onset at the age of about 90 days. This increase is associated with a progressive development of vacuoles in the brainstem motor nuclei but not with a loss of motorneurons. Moreover, the tonge musculature, which is innervated by the hypoglossal nucleus, is just slightly affected by the detectable morphological changes. An antioxidant treatment with vitamin E influenced the T2 relaxation time in the motor brainstem nuclei. T2-weighted MRI of vitamin E-treated transgenic mice revealed a significant decreased T2 relaxation time in the facial, trigeminal and hypoglossal nucleus in comparison with the untreated transgenic mice. My results evaluate the T2 relaxation time in the motor brainstem nuclei as in-vivo biomarker for the quantitative assessment of disease progression in the G93A-SOD1 mouse model during experimental drug therapy.