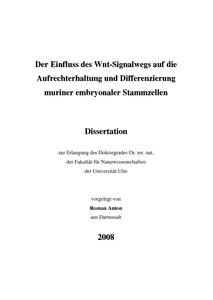 Embryonic stem cells (ESCs) can self-renew while preserving pluripotency and are able to differentiate into many cell types. In both processes, different signal transduction pathways are implicated, including the Wnt/beta-catenin pathway, which was here further analyzed. Loss of beta-catenin in ESCs leads to an altered expression of stem cell marker genes, an altered cell adhesion and a strongly limited differentiation capacity. ESCs express many Wnt-genes, of which many were found to be under the control of beta-catenin, TCFs and receptors of the frizzled gene-family. TCF/beta-catenin reporter-assays indicate that undifferentiated ESCs are capable of reacting to Li+ and Wnt3a but not Wnt5a stimulation and show only low endogenous TCF/beta-catenin activity. This implicates that beta-catenin has a function on gene-expression in ES cells that is likely independent of TCF/Lef1. Additionally, overexpression of the transcriptionfactors Oct-3/4 and Nanog were able to repress TCF/beta-catenin, supporting the hypothesis that beta-catenin interacts with a factor like Oct3/4 to regulate gene-expression in ESCs. Both gain and loss of function studies show that non-canonical Wnt11 is a beta-catenin target-gene and repressor of the canonical Wnt-pathway, thereby forming a negative feed-back loop. During in vitro differentiation the canonical Wnt-pathway can exert a biphasic influence on the generation of Bry-positive mesoderm and cardiomyocytes. At this Li+ and Wnt3a clearly showed different effects. Wnt3a but not Li+ could stimulate differentiation via the Wnt/ras-raf1-mek-erk or the Wnt/Ca2+/PKC/p300 cascade. Cyclosporin A, an inhibitor of CN/NFAT, delays the generation of Bry-expressing cells, implicating that the non-canonical Wnt/Ca2+/CN branch is likely also positively involved in mesodermal differentiation. Furthermore Wnt/beta-catenin could repress migration of EB-derived cells, together indicating new additional functions of the Wnt-pathway in development.