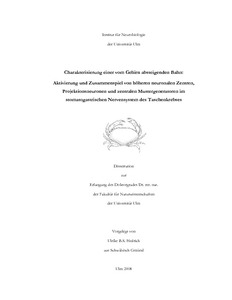 The nervous system receives and processes sensory information from the environment and can thus respond to changes with the appropriate behaviour. How the nervous system selects the adequate motor pattern is not well understood. For the investigation of nervous system function and motor pattern selection in particular, one typically uses behaviours which comprise rhythmic components (walking, breathing). Such rhythmic movements are often driven by central pattern generators (CPGs). The movements of the stomach of decapod crustaceans, e.g., are generated by CPGs in the stomatogastric nervous system (STNS). They generate the oesophageal rhythm (swallowing), the gastric mill rhythm (GMR, chewing) and the pyloric rhythm (filtering). These rhythms are modulated by several projection neurons and they are affected by multiple sensory pathways. How higher neuronal centres select motor patterns out of these multifunctional networks and thus elicit appropriate behaviours is unknown. In my thesis I characterised the projections of two descending brain pathways, the inferior ventricular neurons (IV neurons), in the crab, Cancer pagurus. In addition, their activation via sensory inputs as well as their effects on the CPGs located in the stomatogastric ganglion were analysed. In the intact animal chemosensory stimuli elicited rhythmic IV neuron bursts. Rhythmic IV neuron stimulation in vitro elicited GMR or entrained them, if they were active. In addition, IV neuron stimulation excited the oesophageal motor neuron and inhibited several pyloric neurons. The CPGs in the STNS were mostly affected indirectly via descending projection neurons located in the commissural ganglia (CoGs). I thus characterised the interactions between the IV neurons and four CoG projection neurons and determined the connections between them. My findings support the hypothesis that the processing of different sensory information and the selection of motor patterns occur on the level of higher-order centres.