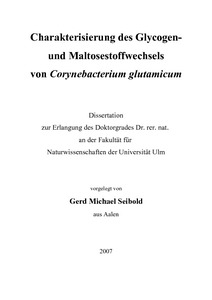 The Gram-positive soil bacterium Corynebacterium glutamicum transiently accumulates large amounts of glycogen, when cultivated in media with carbohydrates as source of carbon and energy. On a first glance glycogen synthesis in this organism proceeds by the pathway generally known for bacteria by phosphoglucomutase, ADP-glucose-pyrophoshorylase, glycogen synthase and branching enzyme. In fact, presence of this pathway for glycogen synthesis could be confirmed for C. glutamicum cultivated with glucose, whereas glycogen synthesis proceeds in this organism when cultivated with maltose by a so far unknown way. A prerequisite for the investigation of this pathway was the characterization of the so far unknown maltose metabolism of C. glutamicum. It was here shown, that following the uptake by a so far unidentified transporter, maltose is metabolized by 4-a-glucanotransferase, maltodextrin phosphorylase, glucose kinase, phosphoglucomutase and eventually maltodextrin glucosidase. Glycogen degradation in C. glutamicum is also closely linked to maltose metabolism. The degradation thereby generally proceeds by the pathway described for Escherichia coli. Accordingly, maltodextrins are formed from glycogen as intermediates by the action of glycogen phosphorylase and debranching enzyme. These maltodextrins are further degraded to finally glucose-6-phosphate by maltodextrin phosphorylase and phosphoglucomutase, which are also part of maltose metabolism.