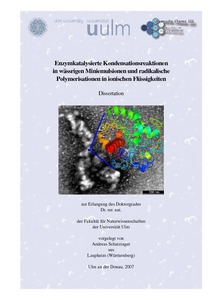 In the present work the first results of the enzymatic esterification of aliphatic carbonic acids with primary and secondary alcohols in mini-emulsion are shown. The influence of the solubility of the alcohols and branched and therefore sterically demanding alcohols on the reaction rate and the maximum conversion of the esterification was determined. To state the efficiency of an enzyme catalyzed condensation reaction compared to an acid catalysed reaction in macro- and mini-emulsion the esterification reactions have been carried out in mini-emulsion as well as acid catalyzed and enzymatically. In addition to the esterification of carbonic acids with a primary alcohol, the attempt to synthesize a per-ester of a hydroperoxide and a carbonic acid was made. Besides the synthesis of simple esters lipases can be applied for the enzymatic synthesis of polyesters in aqueous mini-emulsions. Therefore lactones were used as monomers. For the first time the enzymatic reaction of e-caprolactone to poly((e-caprolactone) in an aqueous medium is described. To show the possibilities of lipase catalyzed reactions in ionic liquids, e-caprolactone has been chosen as a monomer and as a ionic liquid the water-soluble 3-ethyl-1-methylimidazolium tetrafluoroborate was used. In the second part of the present work new heterophase systems with ionic liquids were introduced. With ionic liquids as continuous phase, stable liquid/liquid heterophase systems without additional stabilizing agents like surfactants can be obtained. The radical polymerization in ionic liquids was analysed via calorimetry and the obtained results were compared with the results from preceding works regarding the kinetics of the radical polymerization in aqueous mini-emulsions.