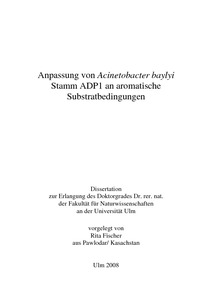 The enzyme protocatechuate 3,4-dioxygenase (3,4-PCD) catalyzes the ring cleavage of protocatechuate (PCA) in Acinetobacter baylyi. This is a key step in the breakdown of a large number of aromatic carbon sources. Catechol 1,2-dioxygenase is structurally similar to 3,4-PCD. Both enzymes are specialized for their substrate. However, studies could show that a R133H substitution switches the specificity of 3,4-PCD towards catechol. In this investigation, random PCR mutagenesis has been carried out to explore the functional role of the R133 in 3,4-PCD. A blue white screening was established to identify mutants with acquired ability of 3,4-PCD to use catechol as substrate. In the screening strains with a R133H substitution and a strain with a new substitution R133C could be isolated. Using site-directed mutagenesis a clone library containing strains with different substitutions in position 133 was produced. Analysis of 3,4-PCD activity toward catechol and PCA revealed further substitutions with changed substrate specificity. Carbon catabolite repression is an important regulatory mechanism allowing an organized carbon source utilization. In A. baylyi this mechanism was investigated using the degradative pathways for the aromatic substrates and dicarboxylates. Transcriptional fusions with the gene for luciferase inserted into the genes areA, antA, benA, hcaA, dcaA were constructed and established in the chromosome of A. baylyi. The respective strains reveal the presence of strong carbon catabolite repression at the transcriptional level. In all cases, in addition to the respective inducer, succinate and acetate in combination have the strongest repressing effect and pyruvate (or lactate) allow the highest expression. Repression by acetate and succinate varied between 88 % for the hca genes and 99 % for the pca genes. The pattern of repression for the different cosubstrates is similar for all operons investigated and was also observed in the absence of the inducing compounds.