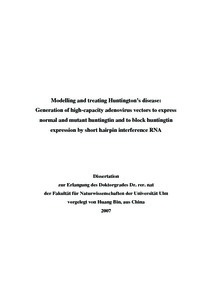 Huntington’s disease (HD) is an autosomal dominant neurodegenerative disease caused by the expansion of a CAG trinucleotide repeat in exon 1 of the huntingtin (Htt) gene. Emergence and progression of HD depend on continuous expression of mutant huntingtin protein. We identified one shRNA, which efficiently inhibited huntingtin expression in cell lines and in mice in vivo. In addition, the formation of Htt aggregates, a hallmark of HD pathology, was attenuated in mouse models of HD, after stereotaxic injection of a high-capacity adenoviral (HC-Ad) vector expressing this shRNA into the striatum. These results indicate that an shRNA strategy could be developed for treatment of HD. Vector-mediated delivery of N-terminal fragments of mutant Htt has been used to study the Htt function and establish HD models in vitro and in vivo. However, due to the large size of Htt cDNA vector-mediated delivery of full-length Htt has not been achieved so far. We generated a series of HC-Ad vectors, which expressed mutant and wild-type versions of N-terminal truncated and full-length Htt either in vitro in primary neuronal cells or in the striatum of mice. Kinetics of generation and localization of Htt aggregates differed between mutant truncated and full-length Htt. Expression of mutant truncated Htt caused very fast formation of aggregates in the nucleus but expression of mutant full-length Htt led to a much slower accumulation of aggregates in the cytoplasm. These vectors will be useful tools for studying HD and may be used to generate large animal HD models.