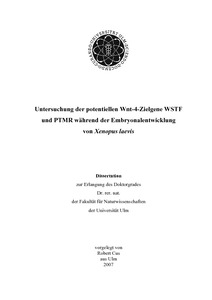 In this study the potential Wnt-4 target genes WSTF (Williams syndrome transcription factor) and PTMR (Prothymosin alpha related) were analyzed during Xenopus laevis embryogenesis. Since PTMR is an as yet undescribed Prothymosin alpha (PTMA) homolog, PTMA was also analyzed to allow for a comparison between PTMR and PTMA. For each of the three genes the temporal and spatial expression was determined, and functional studies to examine their gain of function and loss of function phenotypes were performed. In all cases, the gain of function induced by injecting the mRNA coding for the complete open reading frame did not yield any recognizable overexpression phenotype. The loss of function was accomplished by the injection of Morpholino-antisense-oligonucleotides. In the case of WSTF, no knock down phenotype could be determined. In the case of PTMR and PTMA loss of function, the affected embryos exhibited deformations of the eye and a diminished size of the cartilage. Further analyses showed that the expression of the eye marker genes Rx and Pax6 was not inhibited in these embryos, while there was an increase in apoptosis and a decrease in cell proliferation, particularly in the brain and the eye. Furthermore, the loss of function of PTMR or PTMA resulted in an absent or reduced expression of the forebrain marker Emx1. The expression of the forebrain/midbrain markers Otx2 and Pax2 was also reduced, while the expression of the hindbrain marker Krox20 was not affected. The observed decrease in cartilage size is most likely caused by the reduced cell proliferation, and the eye deformations are probably secondary to disturbances in forebrain development. The quasi-identical spatial expression pattern of PTMR and PTMA and the high similarity of the gain and loss of function experimental data point toward a possible functional redundancy of the two genes.