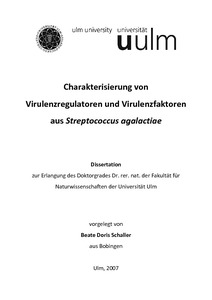 Streptococcus agalactiae is the leading cause for sepsis, meningitis and pneumonia in newborns and emerges to play a major role in infections of immunocompromised adults. In the present work the importance of the putative regulator Rgg3 for the virulence of S. agalactiae 6313 was examined. The deletion of the rgg3 gene resulted in an increased bacterial fibrinogen binding and an increased bacterial adherence to human epithelial cells. Quantitative Real-time PCR experiments with the fbsA gene and reporter gene studies revealed no significant influence of Rgg3 on the expression of fbsA. In electron microscope analysis more FbsA protein was detectable on the surface of the rgg3 deficient mutant compared to the wildtype. These findings lead to the conclusion that Rgg3 exerts an influence on the exposure of FbsA on the surface of S. agalactiae. In addition to Rgg3 the influence of the putative regulator RogB3 on virulence of S. agalactiae was investigated. The deletion of the rogB3 gene in S. agalactiae resulted in a decreased bacterial adherence to epithelial cells without affecting the binding of the bacteria to human fibrinogen and the expression of the fbsA gene. This indicates that RogB3 controls the adherence of S. agalactiae by mechanisms which are presently not known. Additionally, the interaction between the initially investigated regulator RogB2 and the promoter regions of the genes fbsA, sapA and srr1 was examined via electrophoretic mobility shift assays (EMSAs). A direct binding of the RogB2 protein to the promoter regions of sapA and fbsA was detected. Contrary there was no direct binding of RogB2 to the promoter region of srr1. Beside the described regulators the importance of the surface protein FbsB4 for the virulence of S. agalactiae Gi7 was examined. Taken together this work provides a more detailed insight into the virulence mechanisms of S. agalactiae.