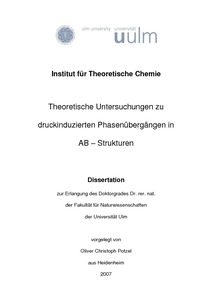 In this work, detailed first-principles-investigations of the high pressure phase transitions B1 - B2 (rocksalt to cesium chloride) as well as B1 - iB8 (rocksalt to inverse nickel arsenide) were carried out using a DFT-code with periodic boundary conditions and plane waves. In a first step, a sufficient number of E(V)-values were calculated for both the B1- and the B2-structure.The E(V)-curves were fitted to a Birch-Murnaghan equation of state. Then the enthalpies of activation of the B1 - B2 transition with transition states in the space groups (-R3m, Pmmn, P21/m) were determined.The pathways can be described using a real valued tenth root of the transition matrix, which is step by step multiplied with the matrix of the primitive vectors of the starting structure until the matrix of the target structure is reached. One was able to prove that these enthalpies of activation calculated without any optimization of the transition structure, reproduced those received from calculations with structure optimization almost perfectly in the case of the Buerger-mechanism (-R3m). The correlation of the enthalpies and given compound parameters was investigated. One took into account the radius ratio, charge, cell constant and absolute hardness (Pearson) of the ions. An equation to calculate the enthalpy for a given compound, was developed. The second part deals with the property of bariumoxide. The structure of BaO at standard conditions as well as its behavior at high pressures differs from compounds mentioned above. Here, arguments for the NaCl structure under ambient conditions of the ions were given. In the final part, a transition path for the B1 - iB8 transition was evaluated. Therefore one had to find suitable supercells of both structure types. Starting from simple transition vectors, the mechanism was subsequently optimized until the activation enthalpy came close to the expected value calculated using the equation mentioned in the first part.