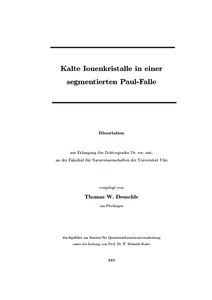 Laser-cooled ions in linear Paul Traps are one of the most promising candidates for a quantum computer. This thesis reports on the construction and operation of a segmented Paul trap. The trap was fabricated in UHV-compatible printed-circuit-board (PCB) technology and consists of 15 segments with a minimum segment width of 0,5 mm. With the large number of segments it is unique in Europe. Although a PCB-trap may not be suitable for large-scale quantum computers, the advantage of such a trap is fast and reliable fabrication with low fabrication costs. Therefore this technology is ideal for rapid testing of new trap geometries and ion shuttling methods. Experiments were carried out with individual laser-cooled 40Ca+ ions stored in the trap and observed by detecting their fluorescence. Measured trap frequencies agree to numerical simulations at the level of a few percent, demonstrating the fabrication accuracy of the segmented trap. Compensation voltages are used to cancel stray fields. The long time stability of these compensation voltages over many months is comparable to a conventional unsegmented trap. To determine the short time stability of the PCB-trap, the heating rate of the motional mode of an ion was measured by detecting fluoresence during Doppler cooling of heated ions. The observed heating rate was much higher than expected due to a massive deposition of calcium on the trap electrodes. Transport dynamics of a single trapped ion was investigated by shuttling the ion between trap locations 2mm apart. A non-adiabatic transport in roughly two oscillation periods in the axial trap potential was achieved. The quality of a transport function was evaluated with two different methods: the success probability and the excess energy of the ion after transport. The measurements were compared with numerical simulations of the classical energy transfer due to the transport. Finally, a string of ions held in a common trap was separated into two distinct traps.