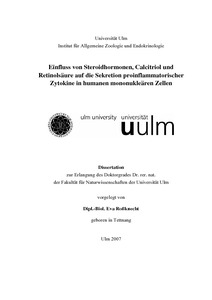 Steroid hormones, calcitriol and retinoid acid are known to modulate inflammatory processes by influencing the synthesis and secretion of various cytokines. The aim of this thesis was to investigate the influence of the above mentioned hormones on the basal, as well as LPS-stimulated secretion of the pro-inflammatory cytokines TNF-alpha and IL-6. Mononuclear cells of male and female donors served as a model-system. Treatment with the synthetic glucocorticoid dexamethasone showed the expected reduction of cytokine secretion, confirming the validity of the method and of the model-system. Interestingly, the reducing effect was more pronounced in cells of male than in cells of female donors, respectively. Testosterone and estradiol treatment showed no effect on cytokine secretion. Calcitriol had different effects on cytokine secretion, meaning activating, reducing or no effect, presumably depending on the method-design and the sex of the cell donor. Interestingly, retinoic acid reduced TNF-a and IL-6 secretion regardless of LPS stimulation. Another focus of this work was to analyse the molecular signal transduction processes leading to reduced TNF-alpha secretion upon retinoic acid treatment. Reduced TNF-alpha transcript levels were observed, while TNF-alpha mRNA stability was not affected, indicating that retinoic acid presumably affects upstream intracellular pathways and transcription. Since MAP kinases are important in the process of LPS-stimulated cytokine transcription, especially in monocytic cells, I investigated the influence of retinoic acid on MAP kinase activity. While p38 MAP kinase activity was not affected, retinoic acid reduced the activity of ERK after 30 minutes of treatment, although no reduction of ERK activity could be observed after long-term treatment. The fast effect indicates that not de novo protein synthesis but a direct effect on ERK is involved in the retinoic acid mediated inhibition of TNF-alpha secretion.