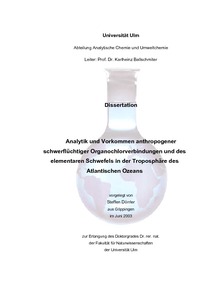 Understanding and quantifying the global dynamics of persistent organic pollutants are important to assess their environmental impact and final fate. During a latitudinal atlantic transect of the German research vessel "Polarstern" in autumn 1996 air samples were taken in the marine boundary layer. 35 polychlorinated biphenyl (PCB) congeners and 25 semivolatile biocides were quantified. Depending on latitude and meteorological conditions the air samples differ in the sum of PCBs and in the pattern of their components. The sum of all quantified congeners is generally lower at high latitudes increasing towards low latitudes. Considering a long range transport of air masses and biogeochemical influences, the air concentrations reflect a present air/sea water equilibrium over the Atlantic. Congener patterns are compared by cluster and principal component analysis. Looking at the meridional course of the alpha- and gamma-isomer of the hexachloro-cyclohexanes an almost constant decrease in the a/g-ratio from 9.6 at 50 ° N to 0.4 at 40 ° S was observed. The atmospheric HCH concentrations too showed a temperature dependence in the Northern Hemisphere. Hexachlorobenzene showed no meridional trend. The air sampling was based on the use of a new graphitised silica gel adsorbent for high volume air sampling. The adsorbent showed a high sampling efficiency for elemental sulfur. After its derivatisation to triphenylphosphinsulfide GC-FID can be used for quantification. This attractive cleanup procedure allows a simultaneous analysis of elemental sulfur and of the organochlorines. Sulfur compounds play an important role in atmospheric chemistry. The occurrence of elemental sulfur in the marine atmosphere was reported before, but was never investigated systematically. This thesis reports for the first time the quantification of gas-phase elemental sulfur as a constituent of the marine troposphere. Finally speculations about the origin of elemental sulfur in air are supplied.