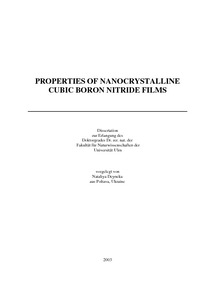 Cubic boron nitride (c-BN) is a material which exhibits similar properties as diamond. Obviously, it makes c-BN attractive for a broad field of applications like tribological and anti-corrosion coatings or as a starting material for high-temperature and high-power electronic devices. Boron nitride films were prepared by ion beam assisted deposition (IBAD) technique on top of Si(001) substrates. In order to overcome the stress/adhesion-related limitation of c-BN film thicknesses, an approach was taken based on sequential ion-induced stress relaxation and growth of thin layers stacked on top of each other to form a thick film. An appropriate in situ sputter cleaning procedure of a c-BN surface was developed resulting in an immediate c-BN growth on top of such a cleaned substrate without any intermediate layers. According to High Resolution Transmission Electron microscopy measurements, c-BN films are also found to be nanocrystalline (typical crystal size 5nm). A promising alternative way to enhance the crystalline quality and adhesion of c-BN films is significant increase of the deposition temperature up to the order of 1000 °C. It has been found that such 1000 °C-type temperatures do not cause Si diffusion from the substrate into the BN film. Cubic BN and hexagonal (h-) BN were also studied with respect to the depth profiles of incorporated Ar using Rutherford backscattering. Diffusion related changes of the Ar depth profiles for both c-BN and h-BN were only observed for temperatures well above 730 °C. In that case, the Ar mobility is attributed to grain boundary diffusion, which appears to be one order of magnitude higher in h-BN than in c-BN film. Grain boundary diffusion coefficients of Ar in h-BN and in c-BN have been estimated. On the other hand, bulk diffusion seems to be negligible at least in c-BN even at 1100 °C.