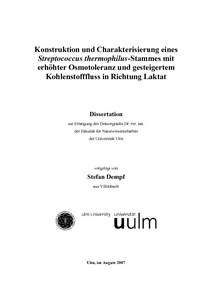 Streptococcus thermophilus is a Gram-positive, anaerobic but aerotolerant organism and widely used in dairy industry in starter cultures. This dissertation describes the construction and characterization of a S. thermophilus strain with improved osmotic tolerance and advanced carbon flux to lactate. The mutant strain S. thermophilus delta-proBA was constructed by deletion of the proline biosynthesis genes proB and proA. This strain did not show any difference in growth and acidification in complex medium, in chemically defined medium the mutant was proline-auxotrophic. Characterization of S. thermophilus delta-proBA under osmotic stress conditions showed a higher osmotolerance for this strain when compared to the parental strain. Based on the inactivated proline biosynthesis it was suggested that the mutant strain would show a reduced phage sensitivity. However, contrary to the expectations, no difference in phage sensitivity was detected with S. thermophilus delta-proBA when compared to the parental strain. Overproduction of the lactate dehydrogenase (LDH) in S. thermophilus delta-proBA resulted in a significantly higher specific LDH activity, leading to a more efficient acidification. Heterologous overproduction of the PEP synthetase (PPS) of Escherichia coli introduced PPS activity which led to a further increase of specific lactate synthesis, most probably by induction of a so-called "futile cycle", connected with higher lactose consumption. The rise of specific lactate synthesis was also clearly present under conditions of osmotic stress, but combined with a reduced acidification rate. With a higher inoculum the acidification rate under osmotic stress conditions was enhanced. Additionally the strain showed a very limited growth, which might result in a reduced phage sensitivity.