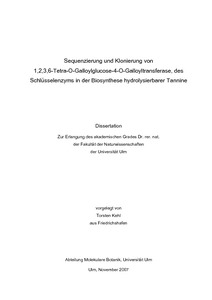 The enzyme 1,2,3,6-tetra-O-galloylglucose-4-O-galloyltransferase (QrTGT) was purified to apparent homogeneity from leaves of Quercus robur by three subsequent column chromatography steps. Investigations of the protein organisation of QrTGT indicate that QrTGT is organized as a homotetramer with four identical sub-units of 62 kDa each. Sequencing of purified QrTGT yielded 16 peptide sequences, 13 of which show similarity to glucoside hydrolases of the family 1 and to beta-glucosidases. Biochemical experiments demonstrated that QrTGT exhibits typical features of beta-glucosidases: the enzyme firstly hydrolyzes the beta-glucosidase substrate 4-nitrophenyl-beta-D-glucopyranoside and is secondly inhibited by the beta-glucosidase inhibitor gluconolactone. According to the inhibitory effect of PMSF on the enzymatic activity of this protein, at least one serine residue must be part of the catalytic centre of the QrTGT. About 45 % of the QrTGT-cDNA was cloned. The open reading frame encoded by this sequence has a length of 269 amino acids. The 3´-UTR of the gene comprises 225 nucleotides. The peptide sequence derived from the cloned cDNA shows strong similarity to glucoside hydrolases of family 1, particularly to beta-glucosidases. Four of the peptides obtained by the protein sequencing and a conserved beta-glucosidase-sequence are present in this polypeptide sequence, suggesting that the cloned cDNA sequence indeed is derived from the QrTGT-gene.