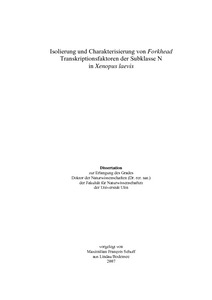 This present report describes the identification und characterization of Xenopus forkhead transcription factors of subclass N. Four genes of this subclass were identified and their temporal and spatial expression patterns were examined during the embryogenesis of Xenopus laevis. FoxN3, the homologue of the human CHES1 gene, was analysed during embryogenesis by blocking the translation process of its mRNA by using an antisense morpholino oligonucleotide. The loss of function phenotype shows reduced eyes and brain, a partial loss of cranial nerves, an oedemic appearance and, moreover, severe defects of the craniofacial skeleton. The craniofacial defects imply a reduction and delocalization of jaw elements. These defects were analysed in great details by using histological and immunohistological methods. By in situ hybridization of marker genes and by cell lineage labelling assays it was shown that the craniofacial abnormalities were not due to misregulation of neural crest migration, but to a failure of jaw formation. The role of FoxN3 in the regulation of cell cycle was investigated by BrdU- and TUNEL assays. While the loss of FoxN3 function did not reveal any difference in the rate of cell proliferation, an increase of apoptotic cells, especially in the developing eye, was observed. Pull-down assays revealed that FoxN2 and FoxN3 can interact with the corepressor Sin3 and the histonedeacetylase RPD3. The putative Sin3 binding site of FoxN2/3 proteins was identified by using FoxN3 deletion mutants. These results indicate that not only Sin3 and RPD3 but also FoxN3 might be a component of the histonedeacetylase complexes I and II. Functional analysis of additional FoxN genes might reveal common regulatory mechanisms. Such a comparison will be useful for a better understanding of their function during embryogenesis.