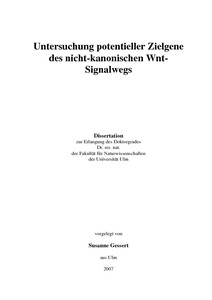 This work describes the investigation of the potential target genes Pescadillo, RGM A and DM-GRASP of non-canonical Wnt-signaling pathway during embryogenesis of Xenopus laevis. The gene Pescadillo is expressed in the anterior nerual plate at stage 18. At stage 23 Pescadillo is visualized in the eye and migrating neural crest cells. Knock-down of pescadillo function by a specific antisense morpholino moligonucleotide results in an eye and cartilage phenotype. Injection of the Pescadillo morpholino leads to a repression of eye specific marker genes and to impaired expression of neural crest cell markers. BrdU incorporation and TUNEL assays indicate that a loss of pescadillo function affects proliferation and triggers apoptosis through a p53 mediated mechanism. The specific RGM A expression starts at stage 12.5/13 in the anterior neural plate. The downregulation as well as the overexpression of RGM A results in defects of eye and neural crest cell development. Loss and gain of RGM A function also leads to a repression of anterior neural maker genes. Loss and gain of function analysis suggest that RGM A is involved in neural crest cell migration. Overexpression of RGM A mRNA additional leads to an ectopic expression of neural crest cell marker genes. These data are in full agreement with previous observations that non-canonical Wnt signaling is required for proper eye development as well as neural crest migration. At stage 25 DM-GRASP starts to express in the cardiac tissue of Xenopus laevis. Repression of DM-GRASP expression by injection of a DM-GRASP specific antisense morpholino oligonucleotide results in a morphological heart phenotype. Whole mount in-situ hybridization exhibits the requirement of DM-GRASP function for the expression of late cardiac marker genes. Further experiments show that DM-GRASP is part of the regulatory network which is essential for the normal development. These results fit to the known function of the non-canonical Wnt-signal in heart development.