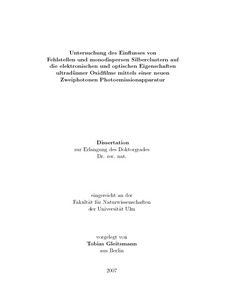 Femtosecond laser pulses were employed in a scanning-laser-microscope setup to generate luminescent species from the initially nonluminescent Ag2O particles. It was demonstrated that this setup meets the basic requirements for the application of Ag2O films as a data storage media. By embedding Ag2O particles into a gelatin matrix the photosensitivity and the luminescence yield could be increased and the mechanical stability of the material was improved. The investigations demonstrated that the activation process is connected to the chemical reduction of the Ag2O and could also be induced thermally. In order to elucidate potential mechanisms that lead to the luminescence of reduced Ag2O under well-defined conditions a new experimental setup was constructed. For this purpose an existing gas phase molecular beam apparatus was adapted and extended by an UHV-surface science chamber. This new apparatus was equipped with surface preparation techniques, a new time-of-flight photoemission spectrometer and was combined with a fs-laser system for time-resolved pump-probe two-photon PES. Ultrathin MgO films grown on a Mo(100)-surface were employed as substrate material. These films and their preparation were thoroughly characterized. 2PPES was applied to reveal the influence of surface defect structures on the electronic structure of these films. In relation to the luminescence experiments, 2PPES experiments were performed with Ag2O films prepared under UHV conditions to obtain further inside into the activation mechanisms. These particles were analyzed with respect to their thermal decomposition as well as to the possibility of photochemical activation. The activation process could be attributed to the formation of oxygen vacancies. First PE-experiments with small mass-selected Ag clusters soft-landed onto MgO films were realized. Subsequent 2PPES investigations provided evidence for a partial electron transfer from the substrate to the Ag cluster.