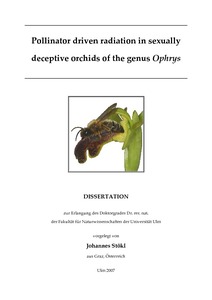 Reproductive isolation of sexually deceptive orchid species of the genus Ophrys is based on the specific attraction of a single pollinator species by mimicking the female sex-pheromone of its pollinator. The attraction of a new pollinator caused by changes in the flower odour by drift or hybridization could lead to sympatric speciation. I investigated putative hybrid swarms of Ophrys on Sardinia and Majorca using behavioural experiments, electrophysiology, chemical analysis, and molecular markers (AFLP). On Sardinia I investigated hybrid swarms between O. lupercalis and O. iricolor. In behavioural experiments I found cross attraction of pollinators between species, as well as flowers that were attractive to both pollinators. The analysis of the EAD-active odour compounds showed a significant difference in the flower odour between both parental species, but with a huge overlap between species. AFLP data of the same plant specimen clearly showed the hybridization between O. lupercalis and O. iricolor. A different situation was found on Majorca, where O. lupercalis, O. bilunulata, and O. fabrella bloom consecutively. In the genetic analyses O. bilunulata did not form a distinct group, due to hybridization with both other species. In contrast to this, the analysis of flower odour shows a distinct odour for each species. My results show that reproductive isolation in Ophrys is not as complete as thought so far and that pollinator shifts may have played an important role in the evolution of this group.