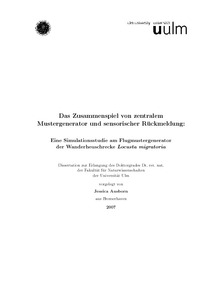 The sensory system plays a key role in the generation of behavior by providing the nervous system with information about the environment and body movements. While the effects of sensory organs have been investigated in many systems, the impact of sensory activity has rarely been studied in conditions where motor output and sensory activity interact. In such situations, emergent properties may surface and govern the characteristics of the system. To study the dynamics of sensorimotor interaction, I used a combination of electrophysiological experiments and computational modeling in the locust flight system. The locust flight motor output is produced by a central pattern generator (cpg) that interacts with phasic sensory feedback from the tegula, a proprioceptor that signals downstroke movement of the wing. A computer model which included all known connections among locust flight cpg interneurons showed a very good match between the model and the animal, both without and with tegula feedback. The model predicted that the frequency of motor patterns can be regulated via a modulation of sensory feedback loops. I tested this prediction by replacing tegula feedback in the animal with artificial feedback through computer-controlled electric stimulation of the appropriate nerves. In particular, stronger tegula feedback resulted in lower frequencies. Two types of simplified models, representing the dynamics of the system, indicate that this regulatory mechanism is a general property of negative feedback loops. They also demonstrated the contribution of cpg dynamics on sensorimotor interaction. A comparison of all models and physiological data revealed the specifics of how tegula influence is mediated. This study thus illustrates the dynamical nature of sensory inputs and that sensorimotor interaction creates emergent properties that dominate the dynamics of the system but may not be revealed in analyses of individual network components.