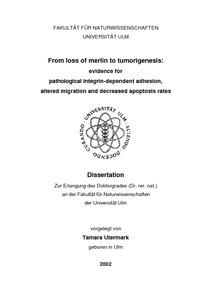 Mutations in the tumor suppressor gene Neurofibromatosis type 2 (NF2) cause the cancer predisposition syndrome NF2 as well as sporadic schwannomas, meningiomas, and human malignant mesotheliomas. The NF2 gene product merlin, an ERM protein, acts as molecular linker between cytoskeleton and plasmamembrane. The aim of this study was to contribute to the understanding on how the loss of merlin gives rise to tumorigenesis. Morphological changes of schwannoma cells (greater cell size, increased numbers of lamellipodia and filopodia, membrane ruffles) have already been described. Accordingly adhesion assays revealed much stronger adherence of schwannoma cells. By comparative gene expression analysis of Schwann vs. schwannoma cells 65 differentially expressed genes such as adhesion and signaling molecules as well as transcription and growth factors could be identified. The integrin receptors alpha6/beta1 and alpha6/beta4 were extensively studied in this thesis, and upregulation was verified at protein level and also shown in immunohistochemical staining of schwannoma tissue vs. normal nerve. Moreover clustering was detected on schwannoma cell surface, indicating high levels of integrin activity. Thus the adhesive properties of the cells are suspected to be affected, which could explain the pseudomesaxon formation by NF2-/- Schwann cells in vivo. The enhanced adhesion was proved to be integrin dependent. By examination of the cytoskeleton clear rearrangements were found for GFAP. Moreover schwannoma cells were observed to show higher migrational activity and to be less sensitive to apoptosis. The data presented here shed light on the cellular responses to loss of merlin, and reveals some potential therapeutic targets. Furthermore the impairment of proliferation of NF2-/- cells by quinidine, previously reported for schwannoma cells, was confirmed in human malignant mesothelioma cell lines, thus divulging another therapeutic approach for tumors related to loss of merlin.