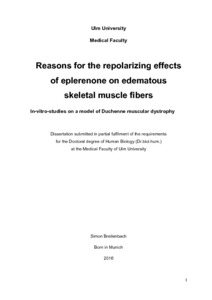 Duchenne muscular dystrophy (DMD) is a disease that only affects males with an incidence of around one in 3500 new-born boys. Its relentless progress is characterized by loss of the ability to walk by the age of 10 or 11. The disease leads usually to death around the late teens or the early twenties. DMD is caused by a large number of different mutations in the large X-chromosomal gene coding for dystrophin, a rare, but important structural protein. Most of these mutations lead to a complete lack of dystrophin in the membranes of the skeletal muscle cells of patients. This lack leads to destabilization and degradation of the muscular contractile proteins. At an early stage of the decay process, affected muscle fibers may show a swelling that was not explained until recently, when Lehmann-Horn et al. noted that the edema was caused by an increase of the intracellular sodium concentration [Na+]i of the muscle fibers. The swollen fibers showed a reduced resting membrane potential and this was the first reason for their inability to contract. A potassium-sparing diuretic agent – eplerenone – was able to reduce the edema by extruding the surplus [Na+]i from the cell interior. This process caused a repolarization of the cell membranes and a recovery of contractility. The present study investigated the fast (within 30 min) action of the diuretic agent with electrophysiological and molecular biologic methods. A major electrophysiological finding was that the action of eplerenone was caused by its effect on the sodium-potassium pump (Na,K-ATPase). Normally, the pump contributes little to the resting membrane potential. The increase of its importance under eplerenone is, therefore, an unexpected new result. In addition, we found that bumetanide, a blocker of the sodium-potassium cotransporter, when given together with eplerenone has a strong positive effect on the repolarization of the fibers. The molecular biologic experiments were designed to reveal by which kind of modification of the sodium-potassium pump eplerenone can exert its action. We found a phosphorylation of tyrosine at position 10 which can be modified by aldosterone. Eplerenone is an antagonist of aldosterone. The search for a kinase that mediates the effect of eplerenone between its receptor and the Na,K-pump yielded a change in the phosphorylation of the protein kinase B and its opponent, i.e. the glycogen synthase-kinase 3. Data from the literature suggest that these findings are of relevance for the effect of eplerenone on the membrane resting potential. Further exploration of these connections could be the direction of further research into this interesting approach to a possible early treatment of DMD.