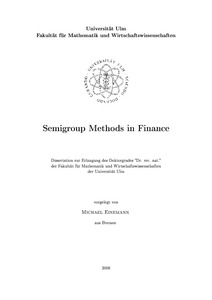 The aim of this thesis is to highlight the role of semigroup theory in mathematical finance and to provide a class of useful methods. Apart from this special task, several new results concerning invariant subsets of strongly continuous semigroups and regular perturbations of sesquilinear forms (related to the classical Kato class) are given. A major step in finance was the pioneering work of Black and Scholes. They showed that prices of financial derivatives can be obtained as solutions of partial differential equations. Solving this equation "by hand", they derived the famous Black-Scholes formula which is still in use today. But with those partial differential equations we are deep in the theory of strongly continuous semigroups. In fact, rewriting the equations in terms of a differential operator one can interpret this as a Cauchy problem. If the operator now generates a strongly continuous semigroup, then the solution of the Cauchy problem and thus the price of the derivative is obtained from the semigroup. Therefore, it is of great interest to determine whether the Black-Scholes operator (or other differential operators arising in mathematical finance) generates a strongly continuous semigroup or not. The idea of Black and Scholes also shows a change of drift in the price process, which can be interpreted as a perturbation of the associated differential operator. In taking a kind of reverse point of view and studying the structure of price operators in an arbitrage-free market it is further shown that these form an evolution family of linear, positive, injective operators. Moreover, some order intervals are invariant under this family. We take these statements as a motivation inspiring the following four main topics of the thesis: invariant subsets of strongly continuous semigroups, semigroups of injective operators, perturbation results for differential operators, generation results for the Black-Scholes operator.