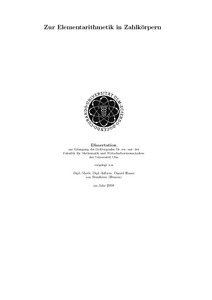 The goals of this thesis are the analysis of the arithmetics of elements of algebraic number fields in contrast to the arithmetics of ideals. A fundamental equation for element arithmetics is stated resembling the fundamental equation of Hilbert"s ramification theory. We study the analytic behaviour of basis elements (which play the role of the prime ideals), using a modification of the proof from Tate"s Thesis to represent the corresponding zeta function as a Mellin transform. Finally, we generalize some tools from analytic number theory to study these zeta functions and proof the meromorphic continuation of logarithmic derivatives of restricted zeta functions defined by elements (in contrast to Dedekind zeta functions defined by ideals) in case of cyclic number fields. We obtain a decomposition of such functions into Euler products which is valid in the critical strip, thus obtaining a new counterpart to the decomposition of Dedekind zeta functions into L-series. The proof also provides an algorithm to compute poles and residues of such functions, given the poles of the Dedekind zeta functions.